By Thy Vo and George Kelly

SAN JOSE » After battling a brush fire in South San Jose off Malech and Bailey roads for more than a day, firefighters have finished their work, Scott McLean, public information officer for Cal-Fire, said Monday.

The fire ignited Sunday afternoon in an area with little road access, according to a Cal Fire representative.

Containment reached 70% just before 7 p.m., and crews were committed to remaining on scene to continue and monitor progress into Sunday night.

The San Jose Fire Department assisted with the response. Contact Thy Vo at and George Kelly at 510-2086488. 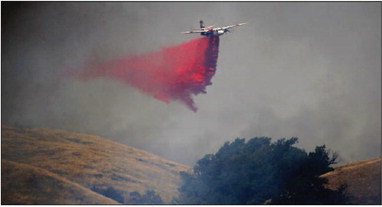 An air tanker attacks the Malech Fire burning Sunday in the hills east of Highway 101 near Bailey Road in the South San Jose area.