How Sunnyvale mayor is chosen becomes flashpoint of Measure B

Even though Sunnyvale’s mayors would remain ceremonial figureheads, how they should be selected has emerged as the most controversial part of a proposed change in the city’s voting system for council members.

Measure B on the March 3 ballot asks voters to switch from a system that allows everyone to pick from among all council candidates to one in which residents could only choose someone who lives in their part of town.

In addition, Measure B would allow everyone to also vote for mayor from a citywide slate of candidates.

“When residents come speak to their mayor … they want to know they have impact over how that person is selected,” Councilman Glenn Hendricks said in explaining the rationale behind Measure B, which he supports and the council voted in June to place on the ballot. “Having two is a better model for those people to have their concerns represented by the City Council.”

Council members traditionally have picked one of their colleagues to serve for two years as mayor, a largely ceremonial title with no extra power unlike the mayors of some larger cities such as San Francisco and Oakland.

But Steve Scandalis, a 40-year resident, prefers the familiar way of choosing a mayor and is spearheading the “No Directly Elected Sunnyvale Mayor” campaign. He wants voters to reject Measure B and is pushing for a seven-district system in which the mayor would continue to be appointed by other council members.

A mayor who’s elected at large gains more power by virtue of his or her citywide mandate, and that undermines the whole point of district elections, which is to level the playing field, Scandalis argues.

“By eliminating all at-large seats, we give maximum local representation and it supports equal representation. No one is elevated above,” Scandalis said. “Seven council members in seven districts provides a maximum benefit.”

Sunnyvale, like other cities across the state, began exploring changes to its at-large election system after civil rights advocates said they might otherwise sue it under the California Voting Rights Act. The 2002 state law allows minorities to force a shift to district elections if they can prove an at-large system dilutes their votes, making it difficult for them to elect their preferred candidates.

Asian Americans are the largest ethnic subgroup in Sunnyvale, making up 43% of the population, yet the city has elected only three Asian Americans to the council in its history, including current council member Mason Fong.

With the threat of a lawsuit looming, supporters and opponents of Measure B both generally agree the city should move to district elections. The rub is how the mayor should be elected.

In the seven-district solution proposed by Scandalis and other Measure B opponents, the mayor would only be held accountable to a slice of the city’s voters, Hendricks said. “If you have seven districts and pick the mayor among the seven, then six out of seven voters never have the opportunity to have a voice on who the mayor is going to be,” he said.

Scandalis’ take, on the other hand, is that mayors would be accountable to the colleagues who pick them, and they in turn are answerable to their district constituents.

Councilman Michael Goldman also opposes Measure B’s provision for mayors, saying it would undermine one of the main benefits of district elections — allowing candidates to spend less money because they could campaign in smaller areas of the city.

“Because of the amount of developer money pouring in, the only people who could run for a directly elected mayor are those who are independently wealthy,” Goldman said.

But Hendricks suggested that’s comparing apples and oranges because the city is now considering an entirely different model, one in which council members are beholden to smaller areas so the mayor needs to understand the needs of an entire city.

“In a seven-district model, district members no longer need to canvass and know the entire electorate. How does that help everyone else when they become the mayor and they need a citywide view?” Hendricks said.

He also takes issue with the argument that a directly elected mayor would be more powerful, noting that Measure B doesn’t change Sunnyvale’s council-manager form of government, in which council members set policy as a group and an appointed city manager implements those polices.

Scandalis contends that on top of everything else, the council structure proposed by Measure B is less responsive to the Voting Rights Act.

“At-large elections are what creates the problem,” he said, adding that an at-large mayor “leaves us forever open for a renewed legal challenge.”

If Measure B passes, the council would have to adopt a map by November laying out the six districts.

The ballot measure needs a majority of yes votes to pass. 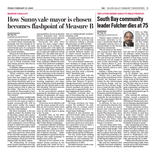