Here’s one thing Sen. Kamala Harris has in common with President Donald Trump: Both of them owe money for campaign events.

The 2 020 presidential candidate and former state attorney general still owes $122,327.87 to the city of Oakland for police security at her January campaign kickoff rally that drew 20,000 people, according to a report from the nonpartisan Center for Public Integrity, published in partnership with NBC News.

The money is due next week, according to the report.

A Harris spokeswoman told the center that the campaign is working with the city of Oakland to “square away any costs.”

But Harris’ public safety bill pales in comparison to the president’s. Trump owes at least 10 cities more than $800,000 — “from Mesa, Arizona, to Erie, Pennsylvania,” according to the center.

The full report, which includes outstanding amounts owed by Trump, Harris, Sen. Bernie Sanders, former Vice President Joe Biden and others, can be read on the center’s website at bit.ly/2FgNHLd. 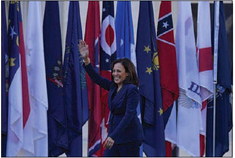 U.S. Sen. Kamala Harris arrives to speak at a launch rally for her presidential campaign at Frank Ogawa Plaza in Oakland on Jan. 27. She owes the city for police security.