WHY HAS N.Y. SURGED BEYOND CALIFORNIA?

As the coronavirus pandemic sweeps the country, a surprising trend has emerged: California, an early hot spot that logged its first inf ection in January, has seen its outbreak grow far slower than other states along the Atlantic and Gulf coasts that didn’t even record a case until last month.

New York, with about half California’s population, marked its first COVID-19 infection March 1. The following day, New York City’s mayor urged residents on Twitter to “get out on the town” while his San Francisco counterpart offered her constituents a list of ways to prepare for the outbreak.

Epidemiologists remain puzzled by the stark differences in how the outbreak has progressed around the U.S. but generally point to California’s early, aggressive “social distancing” measures for slowing the virus’s 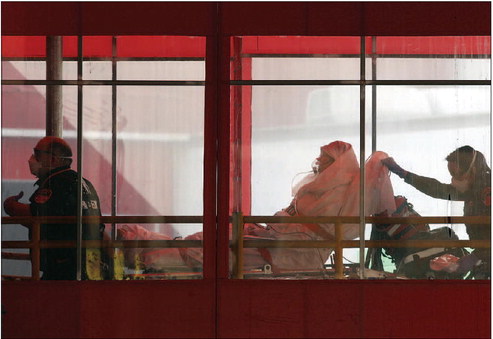 A person wearing a protective face mask walks down a deserted street in New York City in April during the coronavirus outbreak.

“It’s because of the shelter in place, quite frankly,” said Dr. George Rutherford, professor of epidemiology and biostatistics at UC San Francisco.

Even a difference of a few days in mandating lockdown orders, experts said, can make a big difference in slowing the outbreak, as infections spread exponentially in the population.

“If I infect two other people and each of them infects two people, it doubles and doubles and very soon you have very large numbers,” said Dr. Arthur Reingold, professor of epidemiology and biostatistics at UC Berkeley.

The Golden State’s relatively modest growth trajectory today is a stunning turnaround from a month ago. California, which had its first case Jan. 25 in Orange County, was by the beginning of March among the nation’s leading trouble spots.

Figures compiled from state sources by the COVID Tracking Project, started last month by journalists at The Atlantic and the founder of Related Sciences, show that on March 4, California led the nation with 53 coronavirus cases, more than the 39 in Washington, where the country’s first case appeared in the Seattle area Jan. 20, and well over the six confirmed cases at that point in New York.

The extent of testing could be skewing the figures somewhat, experts warn. California has completed 143,800 coronavirus tests, and New York has tested more than double that — 340,058. But that disparity isn’t nearly enough to explain why New York has nine times as many confirmed cases as the Golden State.

Hospitalizations and deaths also have grown slower in California than New York. The Empire State reported 16,837 in its hospitals for coronavirus, and 4,758 deaths from COVID- 19. California reported 2,509 in the hospital and 336 deaths from the respiratory disease caused by the coronavirus.

Washington, which once rivaled California as a national hot zone, also has seen a dramatic cooling. It now has about half as many cases, with 7,984, though it has reported about the same number of deaths — 372 — as California, which has five times as many people. It hasn’t reported statewide hospitalizations.

Like California and the Bay Area, Washington state began clamping down early: It sharply limited public gatherings and closed schools in the Seattle area during the second week of March, though its s tatewide stay-home order did not come until March 23.

Experts say luck may play a role — in particular when it comes to the number of “superspreaders,” infected people who spread the virus around in their community before they feel ill. New York had such a case in the suburb of New Rochelle.

“They were unlucky in that they had a superspreader, which is an unfortunate label because it’s not like they were doing anything, it just has to do with their anatomy or immunologic response,” Rutherford said. “That’s a lot of virus introduced right off the bat. By the time New York went to shelter-in-place, there might have been 10,000 cases — an order of magnitude more.”

“There could be differences in how frequently people interact, shake hands and hug,” Reingold said. “That might change the transmission dynamics from one area to another.”

That, of course, is a reason behind the social distancing measures. Rutherford noted that the Bay Area orders came the day before St. Patrick’s Day. Louisiana celebrated Mardi Gras Feb. 25 before issuing its March 23 stay-home order and is now among the nation’s top coronavirus horror shows.

“Mardi Gras was probably a big contributor,” Rutherford said. “A thing like Mardi Gras is a big amplifier.”

Within California, the Bay Area has seen infection rates rise more slowly than Southern California. Though California’s first cases emerged in Orange and Los Angeles counties, the Bay Area — and Santa Clara County in particular — quickly became the center of the state’s outbreak in February, recording its first cases of “community transmission” not linked to overseas travel or exposure to other cases.

Local distancing measures in Southern California came within days of the Bay Area’s, but confirmed cases there have since eclipsed those in Northern California. Los Angeles County now has 6,910 cases, compared with 1,285 in Santa Clara County and 622 in San Francisco. There are 169 deaths in Los Angeles County, 43 in Santa Clara County and nine in San Francisco.

Rutherford said the spike of new infections is “flatter in Northern California than it is in Southern California” and noted that the Bay Area’s shelter-in-place orders preceded those in Los Angeles.

“Even that three- or fourday difference appears to have made a difference,” Rutherford said.

Even before the lockdown orders, California officials were sounding the alarm earlier than those in the Big Apple. On March 2, San Francisco Mayor London Breed took to Twitter to warn residents to “prepare for possible disruption from an outbreak.”

But New York Mayor Bill de Blasio that day was “encouraging New Yorkers to go on with your lives + get out on the town despite Coronavirus.”

It’s a tweet that will be tough for any mayor to distance himself from. 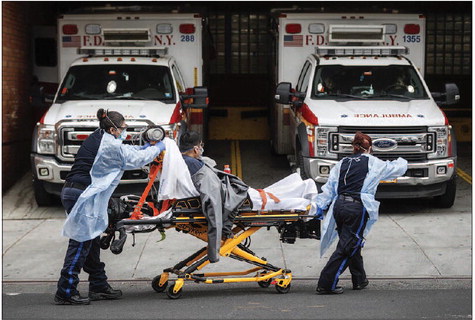 A patient is brought into Wyckoff Heights Medical Center in Brooklyn on Tuesday by staff wearing personal protective gear.