So how hot is it? Just stay inside!

SAN JOSE » J ovita Carranza had planned to beat the heat Monday at the Fair Swim Center, hoping the community pool would provide some brief relief for her three children. But like most Bay Area residents Monday, she found that the heat wasn’t that easy to beat.

The swim center was closed, to the dismay of about a dozen people waiting outside the pool and despite the record- breaking temperatures. After standing outside for nearly two hours, Carranza gave up.

“The kids were complaining about the heat — they want to get wet and have fun. They don’t want to be home,” she said.

Monday marked the third — and hottest — day of a record-breaking heat wave, with temperatures in several Bay Area cities rising into the triple digits.

Even San Francisco was among the hottest places in the United States on Monday, setting a record temperature for June 10 at 95 degrees. Oakland also broke its same-day heat re-

A sign claims wrongly that the temperature reached 107 at the Dr. Martin Luther King Jr. Library in San Jose on Monday. The high was 102.

cord, set in 1994, with the mercury rising to 96 degrees Monday, compared with the previous high of 92 degrees.

A widespread heat advisory was in effect for all of the valleys of the Bay Area, with the National Weather Service warning residents of heat exhaustion and heatstroke and urging people to stay inside — and in air-conditioned rooms when possible.

“I would imagine by the time the sun goes down, several records will have fallen,” meteorologist Steve Anderson said.

Fire crews may have been saying the same thing. Amid the scorching temperatures, fire crews were battling brush fires in several places around the Bay Area, including a blaze in Concord, just south of Highway 4.

The fire, which started on government property at the Concord Naval Weapons Station, burned 25 acres and briefly threatened some homes, Steve Hill, a spokesperson for the Contra Costa County Fire Protection District, said. It was the second fire near Highway 4 in five days.

Fire crews also were still working to contain a fire that broke out Sunday in South San Jose near Morgan Hill. In Yolo County, firefighters continued to battle the Sand Fire, near Guinda, which had spread to 2,200 acres and was 30% contained Monday.

The combination of the heat and the fires did not help air quality. The Bay Area Air Quality Management District on Monday issued its third straight Spare the Air Alert, this one for today. It is the third alert of the summer season and comes as high clouds have trapped hot air, along with the pollutants, Anderson said.

Relief is expected today, at least along the coast. Anderson said the high clouds will abate, and a normal cooling system should cool off many areas in the Bay Area.

“Some of those inland cities may have to wait a little longer,” he said. “They may not feel the full effect of it until Thursday.” 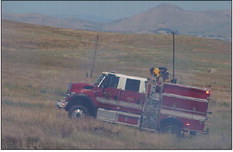 Firefighters work a vegetation fire south of Highway 4 on federal property of the old Concord Naval Weapons Station on Monday.