Letter to the editor

The Sunnyvale City Council members have not been listening to the residents, and now they want to create a new elected position with a four-year term for mayor. Measure B would extend term limits and dilute CVRA benefits, using an at-large mayor vote that we know will be manipulated by the PACS and developers. Until we can get the elections back under residents’ control, I believe we will continue to see decisions made that favor big business at our expense.

Past and present politicians and political wannabes supporting a directly elected mayor are pulling out all the stops: Even though the city council, the city and their consultants are all tacitly pulling for Measure B, an organized “NO on Measure B” committee has formed and is doing more.

The “Yes on B” campaign has recently received $20,000 in new funding and are mailing large fliers. Their website uses Santa Clara as an example to imply that going to court for a resolution will cost millions for plaintiff’s legal fees, but Santa Clara’s fees were so high because they have continued to fight district elections. There is no known group fighting district elections in Sunnyvale; we are fighting for seven districts for truly fair elections for Sunnyvale.

Further, this is an outrageous claim considering the Sunnyvale City Council already refused to take the more cost-effective path to district elections. Other cities enacted district elections in a few months, some for as little as $30,000.

The city is mailing “informational” fliers, which some residents feel implies support for Measure B, and has spent over a half-million dollars on outside lawyers, consultants, city staff and services for community outreach over an 18-month period, but without the customary Charter Review Committee or an independent redistricting committee.

Why do they want this so badly? Isn’t it likely that extended maximum term limits, political ambitions and somebody’s profits are at stake?

We can turn this city government around, but only if we can get elections back under local control. The alternative stinks! Vote NO on Measure B: Demand seven districts! 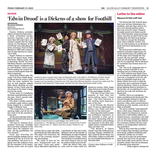